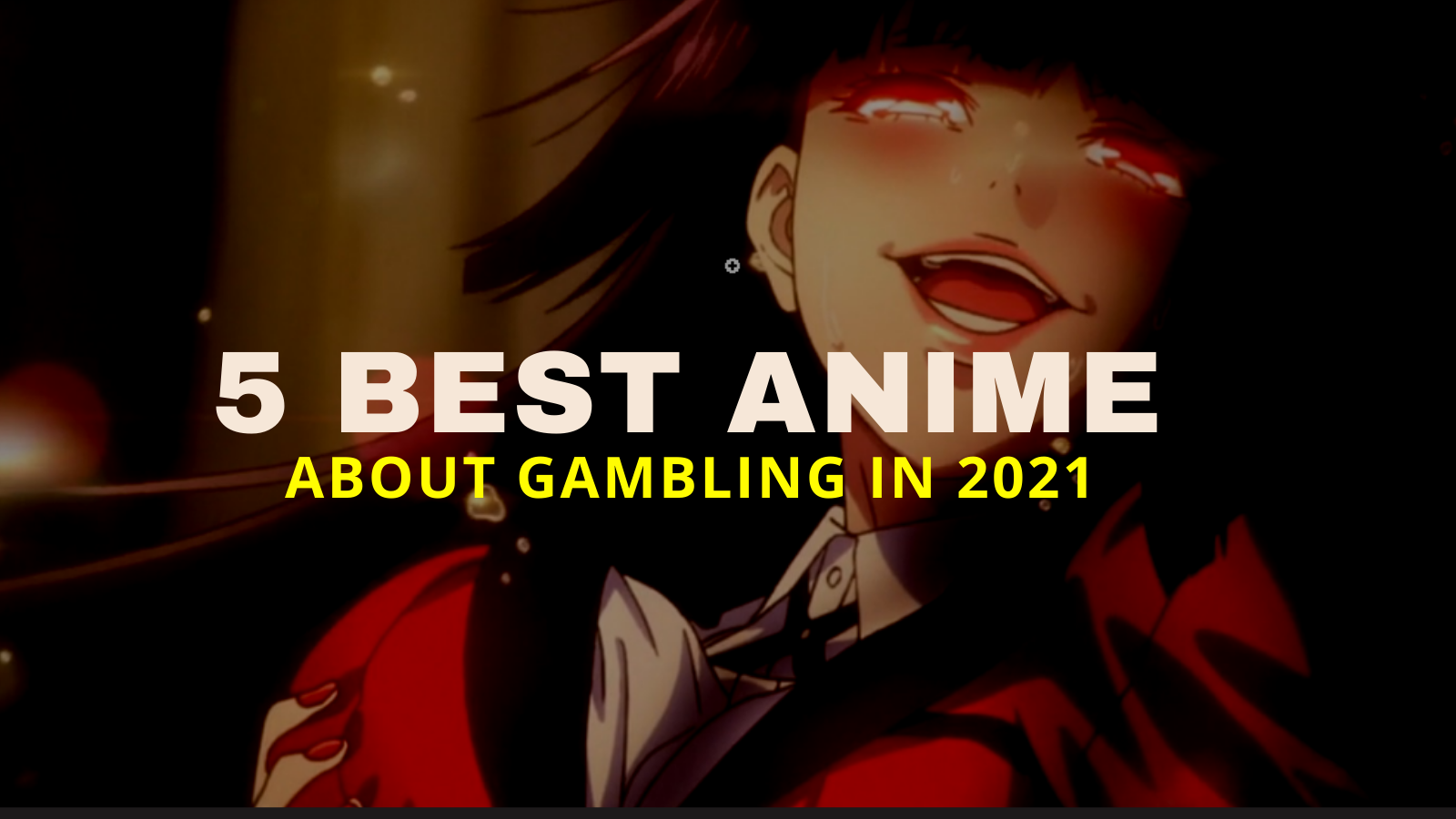 Yes, you are going to know some anime about gambling which can entertain you while you want to watch other genres.

Moreover, anime is a popular entertainment, with an estimated 3.5 percent of the global population watching it on a regular basis. There are hundreds of worthwhile shows to watch, ranging from Bleach to Naruto and Shingeki no Kyojin.

Wait, do you know what the gambling is? if you do not, then take a look at definitions below here.

What is Gambling Actually?

As the definition, gambling is the activity of wagering money or something valuable on an event for the uncertain outcome. The important goal is winning more, or even something which is more profitable.

Every human behavior basically involves choices to respond to letting a situation pass you by. In general, every choice made will lead to an almost certain or predictable result.

However, there are times when the choice falls on something that cannot be predicted.

If the choice that is made falls on this, it can be said that we have given an opportunity to lose something valuable. In other words we have been involved in “gambling” (gambling).

Gambling in Webster’s dictionary is defined as an activity that involves an element of risk. And risk is defined as the possibility of a loss occurring.

Robert Carson & James Butcher (1992) in the book Abnormal Psychology and Modern Life, defines gambling as placing a bet on a certain game or event with the hope of getting a big result or profit.

What is at stake can be in the form of money, valuables, food, and others that are considered to have high value in a community.

A similar definition was put forward by Stephen Lea, et al in the book The Individual in the Economy, A Textbook of Economic Psychology (1987).

According to them, gambling is nothing but a condition where there is the potential to lose something of value or anything that involves risk. However, the act of taking risks in gambling behavior needs to be distinguished from other actions that also contain risks.

No matter if gambling is labeled bad for some people, there are still some of them going to the Casino for betting money. If you want to know how the real gambling but you do not want to be involved, you can watch some anime below that can give you insight about that theme.

Kakegurui has hit the nail on the head with this one. The entire Netflix series is based on Homura Kawamoto’s gambling manga series.

In addition, the story has the setting location at Hyakkaou Private Academy. It is a boarding school where the students are judged solely on their gambling skills.

The academy’s goal, as strange as it may seem, is to produce future leaders and professionals solely based on their ability to outperform their peers in various gambling games.

Students either bring their own money to school and emerge victorious or become ruined and subjugated to the rest. Yes, you are not wrong, this is involved in gambling school anime.

In an even mysterious twist of fate, any student who fails to rise through the ranks is referred to as a “house pet” in Kakegurui. Yumeko Jabami, a beautiful first-year transfer student with a dark secret, enters the picture.

Moreover, she hasn’t joined Hyakkaou for the sake of gaining social status or money. She’s a compulsive gambler who derives real pleasure from it. She starts to challenge all main role characters in Hyakkaou Academy in gambling games.

Kaiji was first published in 1996 as a manga by Nobuyuki Fukumoto and remained in print until 2017.

Meanwhile, Madhouse picked up the franchise and turned it into the 26-episode anime television series Kaiji: Ultimate Survivor, though the creators originally wanted to call the show Gambling Apocalypse Kaiji.

Following the show’s positive reception, Nippon TV decided to air a sequel, Kaiji: Against All Rules, which was hailed as a worthy continuation by fans. The franchise was turned into a live-action film trilogy to feed the fan base, with the first film, Kaiji, being released in October 2009.

Kaiji 2 was released in November 2009, and it took another nine years for Kaiji: Final Game to be released in January 2020, bringing the series to a close. But why has the show lasted for more than two decades? The plot holds the key.

The protagonist, Kaiji Itou, is a down-on-his-luck thug who spends most of his days inebriated. Kaiji is forced to sober up and join an illegal, underground gambling ring on a cruise ship after an ill-intentioned acquaintance dupes him into incurring a large debt.

There’s a lot of gambling going on, and there aren’t a few physical confrontations that force Kaiji to adjust to his new life, which is full of dangers.

The plot is rich and engaging, and Kaiji’s character is both believable and inspirational to anyone who wants to clean up their act, making this one of the best gambling anime.

The Legend of the Gambler: Tetsuya was first published as a manga series from 1997 to 2005, and then televised as Legendary Gambler Tetsuya from October 2000 to March 2001.

Tetsuya follows a traditional master-disciple relationship in which the student outperforms the tutor.

Tetsuya, a gifted gambler in post World War II Japan who plays mahjong in Shinjuku City, is the protagonist of this gambling anime series. Despite his talent, Tetsuya isn’t afraid to put it all on the line in order to win.

Tetsuya is based on the true story of gambler Takehiro Irokawa, who earned the moniker Hourouki Mahjong.

Naturally, the anime romanticizes a bit, so don’t take everything at face value, but the gritty realism infused in the anime is one of the reasons Legendary Gambler Tetsuya works.

With illegal mahjong parlors offering hollow succor to a ravaged country, Japan is depicted in all its post-war truthfulness.

Despite this, the show evokes both hope and despair, the characters are believable, and the anime has a distinct feel to it.

Legendary Gambler Tetsuya’s professional gamblers aren’t afraid to cheat. In fact, cheating was regarded as a clear skill trait in those days, and pros would race against each other to figure out the other’s strategy because the other party had already done so.

All of this combines to make Legendary Gambler Tetsuya one of the most engrossing gambling animes available today.

Another anime about gambling is Akagi, which is set in the post-World War II era.

With Japan still reeling from the atomic bombings of Hiroshima and Nagasaki, Akagi focuses on the story of Shigeru Akagi, a young boy who plays mahjong with Yakuza members and defeats them at the tender age of 13.

Akagi quickly reveals his abilities by rescuing Nangou, a compulsive gambler who has racked up a three-million-dollar debt. In a last-ditch effort to clear his name, he stakes his life on defeating the mafia in one final game that quickly turns into a race to the edge.

However, Akagi arrives just in time to give Nangou some seemingly strange advice that pays off, and he is no longer in debt.

After that, Akagi sits down to play himself, and everyone quickly realizes that the young man is a prodigy on his way to becoming one of the country’s most respected gamblers.

However, Akagi has his own issues: he’s on the run from the cops. We believe this is one of the best gambling animes available today, as it tells the story of a street urchin who secures a better life through his talent at mahjong, a dream for many in post-World War II Japan.

Saki is a fantastic gambling anime that incorporates elements from gambling school anime, Kakegurui which is Compulsive Gambler and Akagi. Saki Miyanaga is a high school student who despises mahjong, a game that has had a negative impact on her life in the past.

However, her friend Kyoutarou Suga introduces her to the school’s mahjong club, and young Saki inadvertently reveals her talent for seeing patterns and excelling at the game.

That inadvertently earns her the enmity of Nodoka Haramura, a talented club member and the previous year’s champion.

Saki quickly overcomes her apprehensions about mahjong throughout the show and decides to set a new goal for herself: to win national competitions. Saki’s rekindled love for the game is fueled by her friendship with Haramura, with whom she makes up.

You may wonder, why do people choose anime gambling for their entertainment? Hm, this article will answer it.

1. Get Out of The Badmood

When watching anime, you are unconsciously carried away by the atmosphere in the anime which makes us want to continue watching the continuation of the episode. Finally, it doesn’t feel like you have spent several hours watching anime.

This is the most important in an anime, because there is no doubt that an anime has an interesting storyline and makes them feel as if they were real.

3. Get So Many Friends

There is no doubt that anime has a very large number of fans, therefore by liking anime you can join communities that discuss the anime you like and eventually you get many friends who have the same hobby.

Even though you watch anime about gambling, you will be presented with very inspiring scenes such as “never give up, work hard, and so on.” You can take the idealistic character of an anime and apply it in the real world.

In the end, you have completely understood not just anime about gambling, but also some other information. Hope it can be useful for you. Yosh!.

11 Best Western Gambling Films: Perfect Entertainment in the Midst of a Pandemic

7 New Gambling Anime That You Can watch in 2021