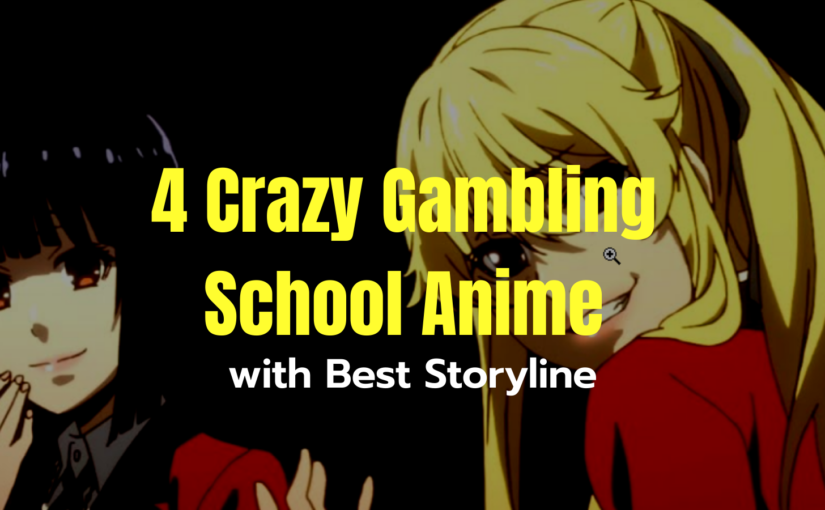 The theme of gambling is also often raised and gets a good response from the audience. Even though it is tense and exciting, it’s better if we just watch it than having to take big risks. What anime about gambling can be watched? Check out the following reviews.

One of the newest anime about gambling because it was released in 2017. This anime is about Hyakkakaou Private Academy which has a pretty strange teaching system.

This school does not focus on teaching academic skills but instead teaches the rich students there all things about gambling. Hm, interesting, isn’t it?.

What is taught is precisely how to win and beat opponents in gambling, where the winner will be the king while the loser will be the slave.

In the anime, students need to learn how to work their way up the hierarchy, which is why there is one within their school. Their ability to gamble and win millions of yen determines their social standing.

You either win and rise through the ranks, or you lose and become indebted, resembling a house pet, essentially a slave who must put up with the abuse of the more powerful students.

In addition, Kakegurui has become the most popular gambling anime. Its captivating art style and animation execution make it an anime that continues to pique people’s interest. Its opening song is a total pro.

It adds to the mystical atmosphere and art style, and it’s a song that will undoubtedly get stuck in your head.

The story of a young woman named Saki Miyanaga, who has been forced to play mahjong by her parents since she was a child. Saki was then invited to join the mahjong club by a middle school friend. Saki’s special ability also astounds her clubmates.

The friends at the club then challenge Saki to a duel to prove that Saki’s abilities are more than just a fad.

Do you want to cause trouble at a reputable all-girls academy? Make it a co-ed event.

When the board of directors of Hachimitsu Private Academy decided to accept male students, they had no idea that the first five boys to enroll in the new semester would be sent to school prison.

Kiyoshi, Gakuto, Shingo, Andre, and Jo peered into the girls’ bathroom, and the Shade Underground Student Council punished them by throwing them into a prison built right inside the academy for a month.

Nobuaki Kanazawa transfers to a new school, only to begin a nightmare that will follow him for the rest of his life. He and his classmates receive strange text messages from “The King” compelling them to participate in tasks that will endanger their lives if they do not.

There are rules that all students should accomplish.

1. Participation is required of all students in the class

2. Within 24 hours of receiving an order from the King, the order must be completed

3. Those who do not finish their order will be punished

4. It is not permitted to leave the game in the middle of it

In conclusion, people may enjoy some exciting gambling school anime from time to time. Consider enrolling in one of the most prestigious institutes to hone your gambling skills.

Perhaps accepting an offer to relocate to a new city in order to increase one’s wealth? In the world of gambling, not only is money at stake, but also the lives of those who gamble.